Manga Entertainment has started releasing select Crunchyroll & Funimation titles, and I decided to pick up one of them as soon as it got released. This is a great show to watch.

Note: The photos in this unboxing have been updated on 24th June 2019, but the content is identical.

Mob Psycho 100 is a 2016 anime series adapted by Studio Bones and published by Warner Bros Japan. The anime is based on the manga series written and drawn by ONE, who is most famous for his other work One Punch Man. Unlike One Punch Man, Mob Psycho 100 retains its original art style which is still pretty neat to look at.

In terms of licensing, Crunchyroll own the English language rights to the anime for the United States, United Kingdom, etc. while it was dubbed by Bang Zoom! with Funimation distributing the series for the United States. In the UK, Anime Limited were initially the ones who were going to distribute the series but due to the Crunchyroll x Funimation partnership combined with Sony acquiring Funimation, the distributor had to lose the rights to the show. Thankfully Manga Entertainment was able to step in and acquire the rights years later.

There is no collector’s edition for this title, unlike the Funimation release. To be perfectly honest, the Funimation limited edition was pretty bad for the asking price (artwork wise it looked great but content wise it was bare-bones). Manga’s release provides a Blu-ray & DVD combo with a slipcover (for the early adopters), while the discs themselves use the Funimation Blu-ray & DVD transfer. The UK version of these discs are region locked to B and 2 NTSC, but the subtitles are unlockable during playback.

You can order the series on Amazon UK in standard combo pack.

Unbelievable psychic abilities. A dark and dangerous force. These are the things that make up Kageyama Shigeo, a.k.a. Mob. But despite his great power, Mob only wants one thing—to be cool! Like any other adolescent boy, Mob has a crush on a classmate, but unfortunately, he’s the most awkward kid in his entire school. Sure, he can do things like exorcise evil spirits, and yeah, he has a dark hidden power that unleashes when his suppressed emotions hit 100 percent. But none of that matters if he’s not cool, strong, or able to impress the girl he likes.

With surprisingly wise advice from master psychic (ahem, master con artist) Reigen Arataka and the help of some quirky comrades, Mob will learn what it means to be a regular kid facing the trials of adolescence—oh, and go up against a host of supernatural troublemakers and an underground psychic organisation up to no good. All in a day’s work for a top-tier esper. 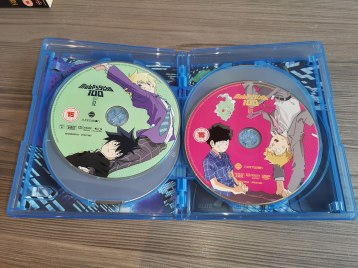 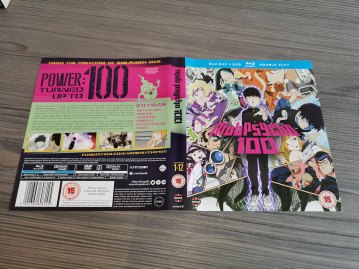 Mob Psycho 100 is available as a Blu-ray & DVD combo pack from Manga Entertainment.