We reach another month of work and so far I ran into so many problems throughout the month it was ridiculous. Never the less I also picked up a variety of titles for my otaku collection. October’s update brings us back to the more expensive range of collector’s sets as well as a couple batch of live-action asian cinema titles!

For this update we have 6 video games, 7 anime titles and 5 live-action asian cinema titles.

The first item of the month is an Aniplex of America release, with the first half of the Unlimited Blade Works 2014 anime series. I have watched the series a while back and I enjoyed it a lot so I’m happy to finally own this rather expensive set. In terms of the second half of the series, I plan to pick it up at a later point but hopefully sooner so that I can get it out of the way before it is too late.

The most frustrating addition to the haul this month is a game I have been after for a while, but much like Ys 8 the folks over at NIS America have once again decided to not even bother to keep the game in stock. It is out of print and very hard to find not only in the UK but also in other territories as well. As such I had to pay quite a lot for a physical copy but at least I still received the Day One Edition contents. Fortunately the previous installments are still in print (well at the time of this post that is). 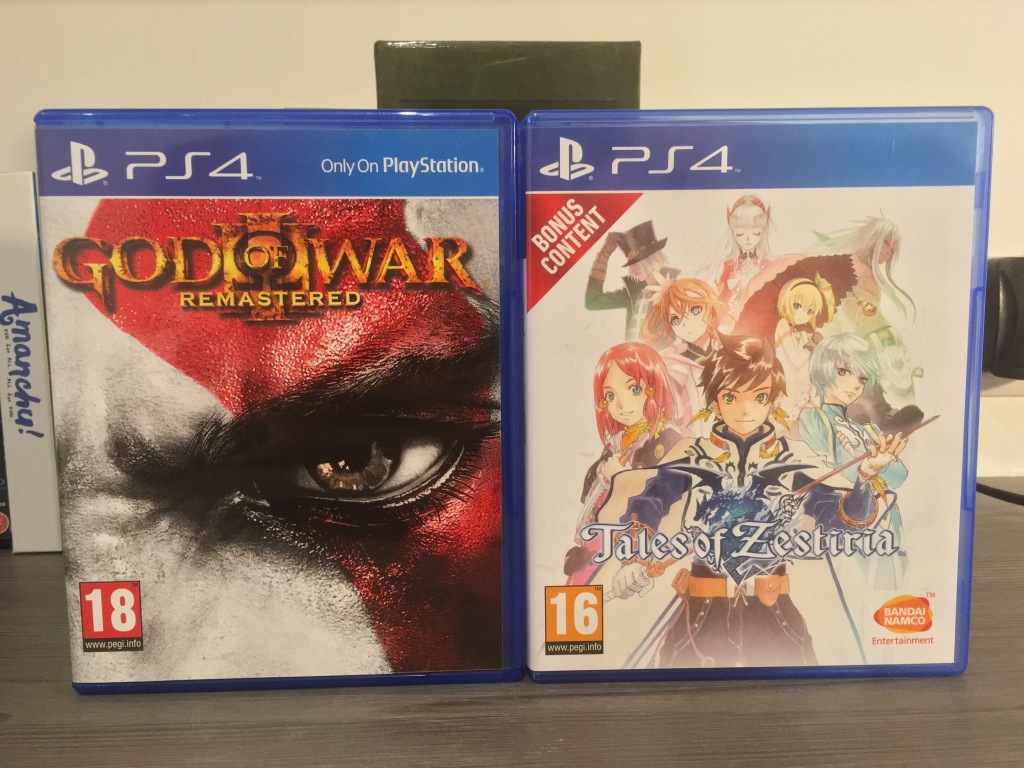 #03 | God of War III Remastered and Tales of Zestiria

Much like the PS3 games I acquired in the last haul, I once again went to CeX and found these two games selling for a pretty solid price and condition so I decided to pick them up when I had the chance. So far I have finished God of War III Remastered and it was a lot of fun, especially with how the story went which was pretty over-the-top compared to its previous games.

Here’s something that was quite unexpected. Bullet Girls is one of the many Japanese imports I have been after for years, and it just so happens to be sold on eBay for a low price. I went for it and along the way I also acquired the first Muv-Luv visual novel that was recently released on Vita. I’ll be picking up Bullet Girls 2 and Muv-Luv Alternative later down the line. In fact I will try and get as many Vita games as I can within the next couple of months, considering the platform officially discontinues in 2019. 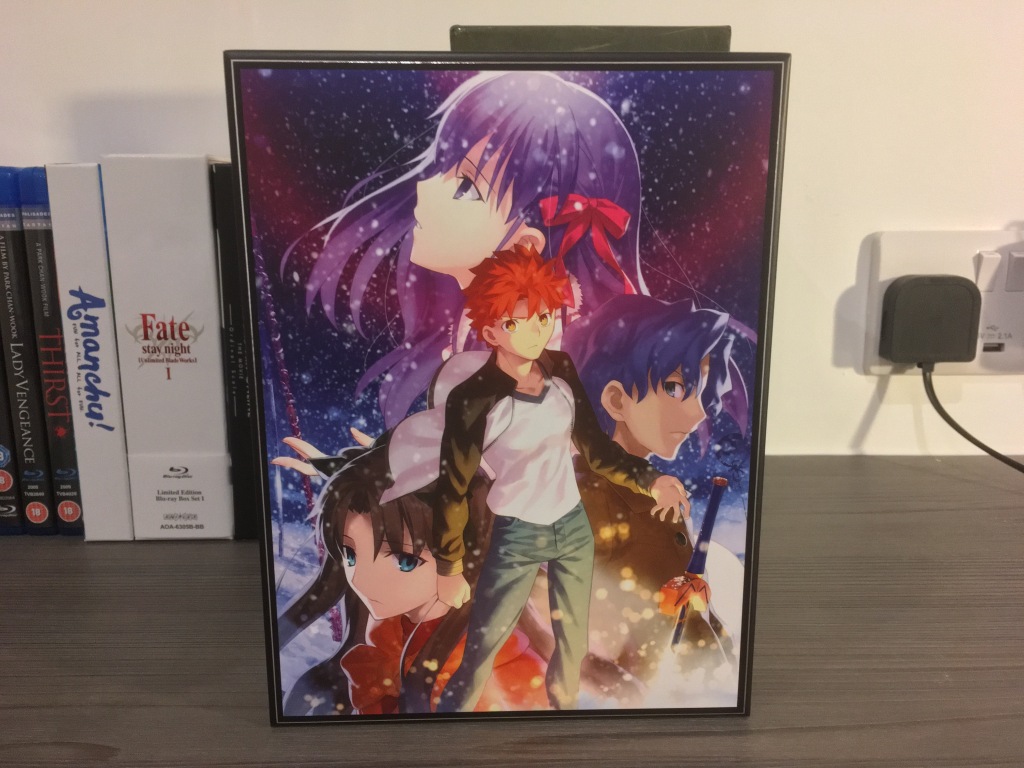 It has certainly been a couple years since I last imported an anime from Japan. Initially planned to import the US release, I have decided to change ships by importing the Aniplex of Japan release for Heaven’s Feel. I have watched the film and really enjoyed it, in fact I was more surprised than anything considering I wasn’t expecting the film to go into a pretty dark direction compared to the other routes shown in the previous anime series.

Back in September Rightstuf were selling a bunch of ‘damaged’ stock and I was finally able to get GATE’s limited edition. I actually decided against it at first but over time I started to slowly like how the set was handled and when it arrived I actually like it even more, especially the replica weapon which is rather amusing to witness. I have watched the first half of the season back when it was simulcasting so I can now finally check out the second half at some point. This set did get hit by customs but I was able to pay it off online to save myself the hassle of dragging myself to the sorting office.

The first Asian version to join the video game collection (properly) is from Play Asia and East Asia Soft. This is a Korean shoot em up in bullet hell style that was being sold for a solid price, free shipping and very nice packaging. I had a go and really enjoyed what I have played thus far.

#08 | The Testament of Sister New Devil

Next we have one of the reasons why I ended up in overdraft during October. The show’s second season went on an early bird sale and I decided to pick up the first season as I spotted it selling for a good price on Zavvi. The set arrived and honestly it’s a nice packaged release. Not much to say other than I now own another harem ecchi uncensored series lol.

Just like Season 1 I also ordered Season 2, though in this instance I ordered it from Anime Limited’s shop. Buying it now meant I wouldn’t have to worry about it later down the line considering the first season did well during pre-orders so I had expected that to sell out at some point within the next four or so months. Both Season 1 and Burst are uncut and uncensored for the UK.

Upyo. I am happy to own the first season of this anime series. There has never been any form of English release prior so I’m glad it’s finally available to own on home video. The UK release is also really nice and well packaged. I picked this one up during its early bird weeks prior.

This is an interesting pickup as I actually planned on importing this film. However I decided to go for the UK version because the sets themselves are pretty much identical so I felt it wasn’t worth spending £50 more just for a similar release. The video quality won’t be perfect but it’s still watchable for the most part. I should definitely watch this before going into the Alicization anime series. 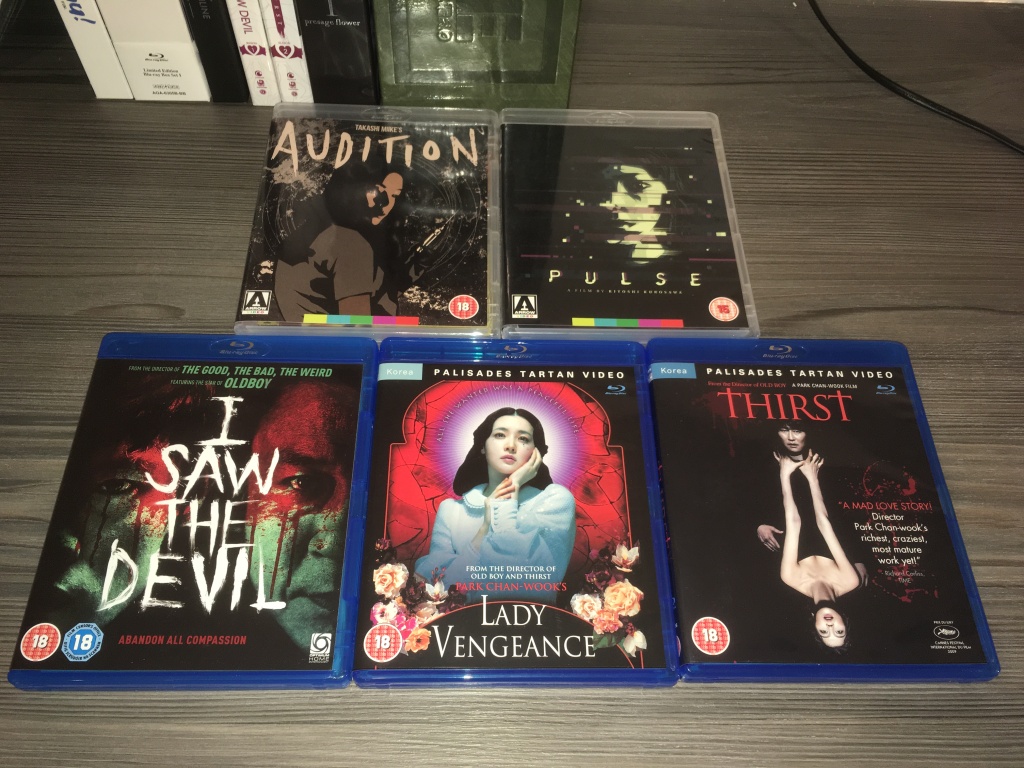 The last pickup of the month is something I have been meaning to do for quite sometime now. I have finally picked up more live-action asian films for once. HMV does their usual 5 for £30 deals and I decided to make use of it to acquire five more titles; 2 in Japanese and 3 in Korean.

The films chosen were the following:

So far from the five films I have currently watched Audition quite recently. It certainly lives up to its name as a notable Japanese horror film.

That’s every item I received during the month of October. As mentioned I over-spent by accident during the month so the hauls for November are going to be more focused on a different set of items rather than a huge one, well except for Black Friday if I find something good.

I did place an order for the game Shining Resonance Refrain after finding a good price for it. The Senran Kagura Burst Re:Newal has been delayed due to Sony’s new policy but regardless I still intend on purchasing the collector’s edition once it becomes available again. For anime I have Code Geass: Lelouch of the Rebellion Movie 1 on order which is technically supposed to be released at the end of the month but stock is pretty much done already due to MCM weekend. Anime Limited will also have some early bird planned later down the line so I expect Mobile Suit Gundam Thunderbolt, Maquia and Fireworks to be part of it.

And lastly, more live-action asian cinema films are planned. Haven’t decided on which titles, so it’ll depend on what is available.